Take pictures of the ones you love

Taking pictures of the ones I love started early in 2017. I was taking street portraits of perfect strangers but I had none of the people close to me. Louise hated the idea and pushed back every times I asked her to pose. It would have looked tacky anyway. She was annoyed when I took candids but in time got used to it. I got few learnings from it.

Joshua Tree National Park can seem unwelcoming, especially during the heat of summer. In fact, it is delicate and extremely fragile. Shaped by strong winds, sudden torrents of rain, and climatic extremes, rainfall is sparse and unpredictable. To the casual eye, it may appear defeated and dead, but within this parched environment one can find an intricate living systems waiting for the opportune moment to reproduce. Two deserts, two large ecosystems primarily determined by elevation, come together in the park: the Colorado Desert and the Mojave Desert.

He looks animated but he was not mad, mostly talking to himself.

If Rembrandt Models Had Smart Phones

This is a bit pretentious but if you have a better label, let me know.

First summer day, auntie was having a blast with her niece. 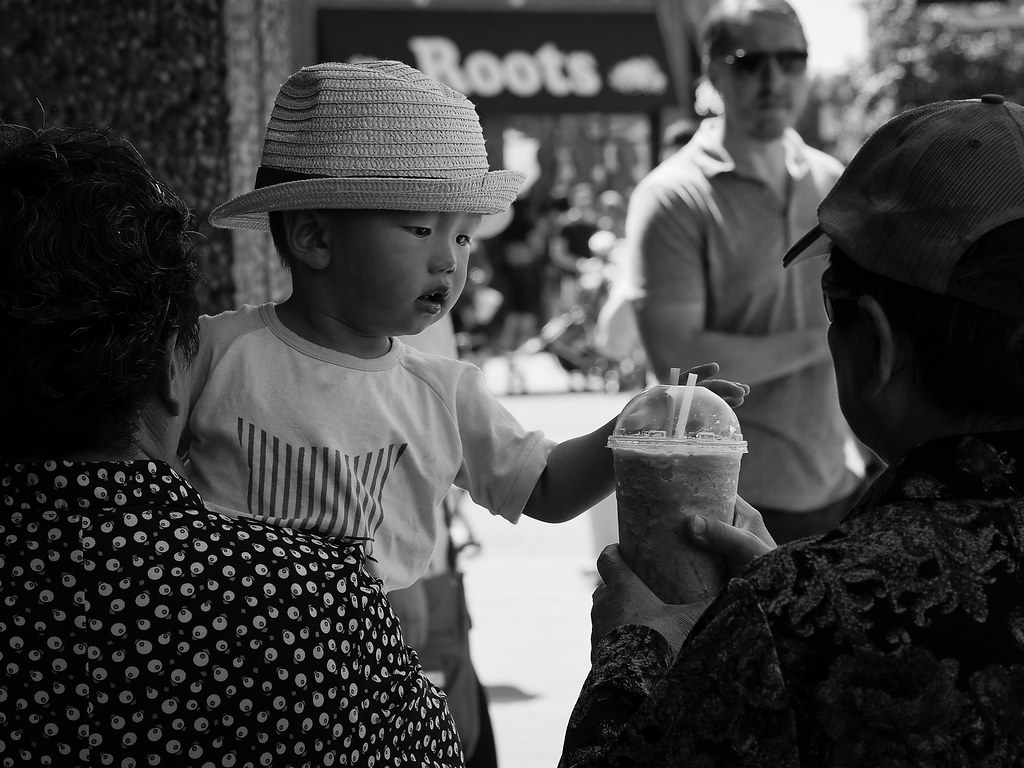 A bike, a helmet and a rack

Reflection at the Coffee Shop

Last month, I tried OC, OL, OD, OM as an exercise. It meant using one camera, one lens, one per day (or more) for one month. I did more like one every other day. But I stuck to the same camera and lens even when the 55mm felt restrictive.

Yesterday morning, walking on the path, I noticed the geese and the reflections. There is no way I would have capture this image before. It looks like the exercise had some value.

Sibbald Creek Trail, west of the City of Calgary, provides an alternate route to Kananaskis Country in Alberta. Also known as Highway 68, it begins at its intersection with Highway 40 and ends at Highway 1.

I prefer that road in the winter, less dusty than the rest of the year. It is nowhere as busy, we saw on ly 2 other vehicles during the 4 hours we were there. The weaher forcast was mix of sun and clouds. We got clouds, fog and snow. The temperature was -19 Celcius.

The light was more "difficult" than anticipated. But hey, at least the images do not look like postcards.

Taken above the Reconciliation Bridge.

Blue hour at the Reconciliation Bridge. The bridge is a through truss bridge in Calgary and connects Downtown with north-central Calgary communities such as Bridgeland and Crescent Heights, by spanning the Bow River between 4th Avenue South and Memorial Drive.

Lake Louise is possibly the most iconic land mark in Alberta. Thousands come every year and take a picture or two. Like others, I can't resist when I go there to do the same, in spite of living only two hours away since 1988. Depending on the time of the day, the weather, the season, I always get something different. I was surprised when National Geographic picked one of mine.

Lake Louise is possibly the most iconic land mark in Alberta. Thousands come every year and take a picture or two. Like others, I can't resist when I go there to do the same, in spite of living only two hours away since 1988. Depending on the time of the day, the weather, the season, I always get something different. I was surprised when National Geographic picked one of mine.

I always found the hijab mysterious and exotic but taking street pictures felts intimidating or invasive. Fortunately for street photography, a festival is what a well stocked pound is to fishing.

There are four lakes in Alberta named Frank Lake. This one is a restored wetland located 6 km east of High River, Alberta. The lake is controlled by Ducks Unlimited Canada for wildlife management purposes. It is an important bird area.

My day at Frank Lake was a photographer dream. The light, the weather, the birds, everything was perfect. I don't recall coming back from a shoot with so many keepers.

With a golden head, a white patch on black wings, and a call that sounds like a rusty farm gate opening, the Yellow-headed Blackbird will get your attention. That one was in a prairie wetland, Frank Lake.

Frank Lake Conservation Area is an amazing place. There are several similar places in the area. It might have turned me into a birder.

Minus 25 C, Lake Louise area, it was cool in many ways. I was told that those dogs burn up to 8000 calories every day. Scenery was fantastic.

The pictures have been taken in Montreal, on a late rainy Sunday afternoon. The crew was finishing to install the Christmas light across the street from my hotel. Took my new Voightlander 20mm f/3.5 to work; the little pancake lens became one of my favourite lenses.

Few kilometers from Drumheller you travel along flat prairies and then suddenly descend into a valley that provides some of the hottest temperatures in Canada, dinosaur bones, strange formations, Hoodoos, coulees and ravines. It is hard to picture this area was once covered by dunes for miles.

The Okanagan Lake is a 135 km long, between 4 and 5 km wide, deep lake in the Okanagan Valley BC. I always like this image, the colours, the boat, the mid morning light.